Home > General Information > About Us

About Pillai College of Engineering 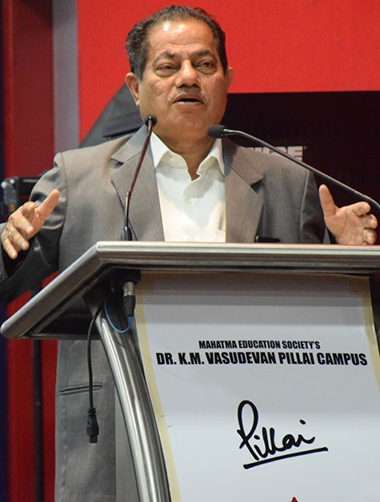 Pillai College of Engineering (Erstwhile Pillai Institute of Information Technology until April 2016), established in 1999 under the patronage of Dr K M Vasudevan Pillai, is a reputed engineering college in Navi Mumbai. It is affiliated to the University of Mumbai, approved by All India Council for Technical Education (AICTE), New Delhi and is recognized by Government of Maharashtra. PCE is approved Research Centre of Mumbai University, which offers PhD degrees in Mechanical Engineering, Computer Engineering and Information Technology. The institute is NAAC accredited with A+ grade by NAAC and three of its departments have been accredited by NBA. The institute strives to provide state of the art facilities conducive to effective teaching-learning, research and consultancy. It further takes every effort in inculcating in the minds of students the respect for the environment. Faculty of PCE is very active in R & D and have completed projects for government agencies such as DST, BRNS, ICSSR and UGC. PCE has also has undertaken and completed urbanization studies for UN office project on ‘Urban Expansion’ in collaboration with New York University and continues to provide consultancy in similar fields to Tata Consultancy Engineering (TCE) and CIDCO.

Cities in developing countries are rapidly expanding, and it is expected that about 65% of the world population would be living in cities by 2050. Unfortunately, the expansion is unplanned and disorganized which leads to inequitable distribution of public services, unaffordable housing, lack of sufficient streets and roads and insufficient open spaces. Scientists and engineers, world over, are looking for technological solutions to the problems, such as, unorganized traffic, unenforced traffic rules, poor quality public transport and parking facilities, deficiencies in water supply, air and water pollution, etc. Pillai College of Engineering has taken a timely lead and has started a series of conferences on “Technologies for Future Cities”. The first conference in the series was held during January 08-09, 2019. The conference was a great success. There were about dozen invited talks followed by a Panel Discussion. About 250 scientists and engineers attended the conference. The present conference is 2nd in the series. The conference would consist of, both, contributory papers and invited talks.

Panvel is an old town in Raigad District of Maharashtra and is famous for its heritage of lakes, temples, nearby sanctuary and forts. Panvel Municipal Corporation is the first Municipal Corporation of Raigad. The authority of City and Industrial Development Corporation (CIDCO) has been the backbone in the development of Panvel. The town is situated on the outskirts of Mumbai and is all set to become the new transportation hub of Maharashtra serving the major trade and passenger routes by road, rail and air. It is reachable from Mumbai railway stations by local train and by taxi from Mumbai airport. Depending on the starting point, the travel time varies but, generally, does not exceed 90 minutes.